100th Anniversary of the Academy of Nutrition and Dietetics

The American Dietetic Association was co-founded by Lenna Frances Cooper in 1917, who specialized in vegetarian nutrition due to influence from John Harvey Kellogg. She was senior author of Nutrition in Health and Disease, used as a textbook for 30 years in dietetic and nursing programs throughout the world.

As we celebrate the 100th anniversary of the Academy of Nutrition and Dietetics (formerly the American Dietetic Association), it is a good time to reflect on our Academy’s rich history. 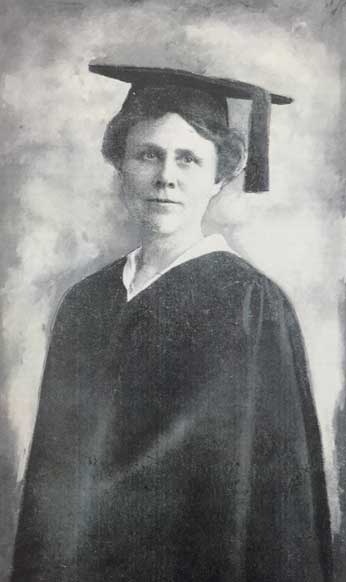 It is a time to honor and recognize the visionary women who started our professional organization. One such woman was the Academy’s co-founder Lenna Frances Cooper. In describing her character and dedication to the dietetic profession, the July 1965 Journal of The American Dietetic Association states, “This woman who accomplished so much in the field of applied nutrition and dietetics was slight of stature, quiet in voice, and gentle in manner, but she had the true spirit and courage of the pioneers. She had vision, steadfastness of purpose, high integrity, and a thirst for knowledge which she shared freely with her students and staff. Her warm personality and deep understanding of others made her an ideal teacher and dietitian and won friends wherever she went.” (1).

Lenna achieved much in her nutrition and dietetics career. To give structure and professionalism to the field of dietetics, she was the first to propose the formation of the American Dietetic Association (now known as the Academy of Nutrition and Dietetics), which she co-founded in 1917. She became the Academy’s first vice president and later served as the fourteenth president in 1937. During World War I, she was the first Supervising Dietitian for the U.S. Army (1918- 1919). Lenna saw the need to economize food during the war and in 1917 wrote the book, How to Cut Food Costs. In 1929, as a charter member, she became the first president of the Michigan Dietetic Association. Lenna served on the staff of the U.S. Surgeon General and created the Department of Dietetics at the National Institutes of Health. Her greatest renown came as senior author of Nutrition in Health and Disease, used as a textbook for 30 years in dietetic and nursing programs throughout the world.

"Although we know them as “vegetable oils,” they’re actually pressed mainly from seeds: cottonseeds, rapeseeds, safflower seeds, sunflower seeds, sesame seeds, and corn, as well as from soybeans. We’ve seen how these oils started to become popular for culinary use when the AHA endorsed them for “heart health” in 1961. Having the backing of the country’s highest medical authority on heart disease gave them an enormous boost. “The rush to get aboard the polyunsaturated bandwagon has become a stampede,” gushed the trade publication Food Processing in that same year." - Nina Teicholz - page 84

Your Heart Has Nine Lives

While Keys and others firmly believed that polyunsaturated oils would help prevent heart disease due to their cholesterol-lowering properties, it’s also true that the AHA received millions of dollars in support from the food companies that manufactured those oils. Remember that the AHA’s very launch as a nationally influential group in 1948 depended upon Procter & Gamble’s “Truth or Consequences” radio show. Campbell Moses, AHA medical director in the late 1960s, even posed with a bottle of Crisco Oil in an AHA educational film. And remarkably, when Jerry Stamler reissued his 1963 book, Your Heart Has Nine Lives, it was published as a “professional” red leather edition by the Corn Products Company and distributed free of charge to thousands of doctors. Inside, Stamler thanks both that company and the Wesson Fund for Medical Research for “significant” research support. “Scientists in public health must make alliances with industry,” he told me, unabashedly, when I asked him about the connection. “It’s tough.”

Stamler is correct; nutrition studies are expensive and funding sources limited (although less so in his day), and researchers have long solicited food companies to fill the financing gap. Yet one could reasonably argue that the connections forged by Stamler, Keys, and others in those early days had an exceptionally outsized influence on the course of the American diet. Replacing saturated fat with vegetable oils, after all, became the backbone of the “prudent diet,” which endures to the present day.

• Increase intake of unsaturated vegetable oils and other PUFA, substituting them for SFA wherever possible.

Jean Mayer, one of the “greats” of nutrition science, said in 1965, in the colourful language that has characterised arguments over diet, that prescribing a diet restricted in carbohydrates to the public was “the equivalent of mass murder.”

The Treatment of Diabetes Mellitus: With Observations Upon the Disease Based Upon One Thousand Cases

What the Fat?: Fat's In, Sugar's Out: How to Live the Ultimate Low Carb Healthy Fat Lifestyle

Healthy Eating: The Big Mistake: How modern medicine has got it wrong about diabetes, cholesterol, cancer, Alzheimer’s and obesity

The Hacking of the American Mind: The Science Behind the Corporate Takeover of Our Bodies and Brains

The Dietitian's Dilemma: What would you do if your health was restored by doing the opposite of everything you were taught?